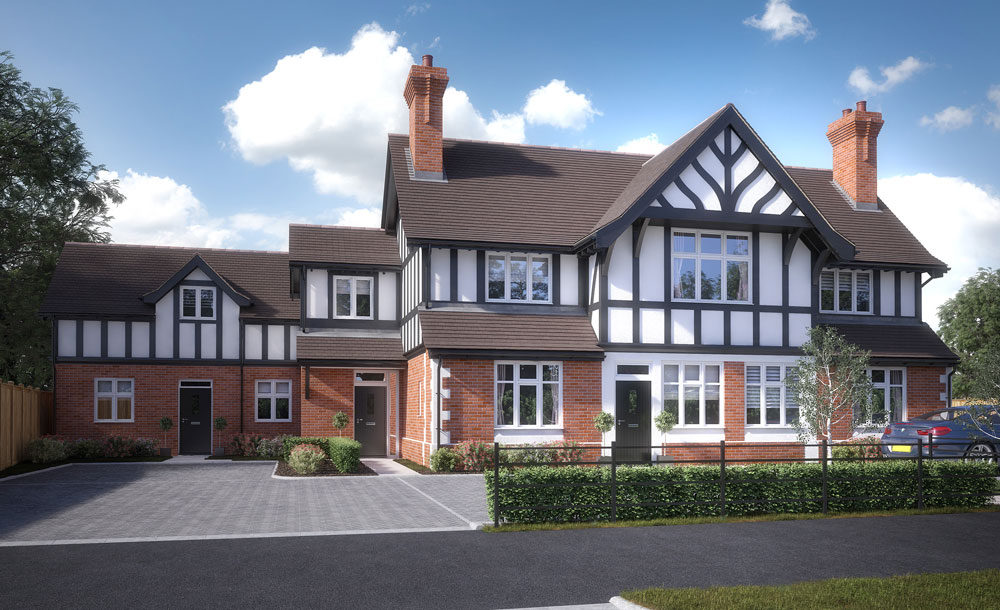 A housing development which involves the remarkable restoration and conversion of a derelict pub has helped T A Fisher reach the finals of the Thames Valley Property Awards (TVPA) 2020.

T A Fisher, which is 125 years old this year, launched Castlebrook in February. The scheme in North Warnborough near Odiham in Hampshire, offers 11 new houses in a mews-style development where four of the properties make up the showpiece of the scheme, the restored former Jolly Miller pub.

It was originally designed by architect Arthur J Steadman, who was commissioned by Alton-based brewery Crowley’s in 1908. So successful was his distinctive design, it was replicated in a number of others across North Hampshire.

Although the building is not listed, T A Fisher pursued a restoration route and worked closely with the Planning Authority Conservation officer to ensure the heritage and character of the building was protected while converting it to four new houses.

The work involved some fine detail including replacing a missing ‘R’ where the name of the pub had been carved into the woodwork beside the front door of one of the new homes.

The scheme, which falls within a conservation area, also includes seven new build houses. These were designed to complement neighbouring Castlebridge Cottages, a row of 15th Century Grade II-listed properties.

A particular challenge thrown up by the scheme was to solve a localised flooding problem caused by poor maintenance of a culvert which affected a section of the site as well as neighbouring property. T A Fisher’s solution, including upgrading the culvert head wall, has alleviated the issue.

T A Fisher’s entry in the TVPA is in the Housebuilder of the Year category. The firm’s entry states: “The conversion itself has restored a neglected piece of architecture, which was visible to all those passing through the village, back to its former glory with the full characterful façade now fully restored.”

Castlebrook is one of several projects in the recent T A Fisher pipeline which have had widely varying characteristics and challenges.

In summing up its approach, managing director John Fisher, said: “ The Castlebrook project provided particular challenges especially centred on the existing building which required very careful assessment of the existing structure which had been altered several times over the years. I have to commend our construction team on their diligence passion and commitment.”

In Hook, Acorn House represents another mix of a conversion to new homes alongside new build properties.

Around two years ago the firm completed a scheme called Blue Prior at Church Crookham where new build homes were part of a development which also included a children’s day nursery, assisted living apartments and a BUPA care home.

There are 25 homes currently being built in Sonning Common and T A Fisher will shortly begin work on a beautiful 20 acre site in Mortimer, a village where its head office had been for more than 20 years.

That scheme has involved considerable engagement with the local parish council and could potentially unlock a new school and doctors’ surgery.

TVPA winners will be announced at the final on September 3 at Ascot Racecourse.