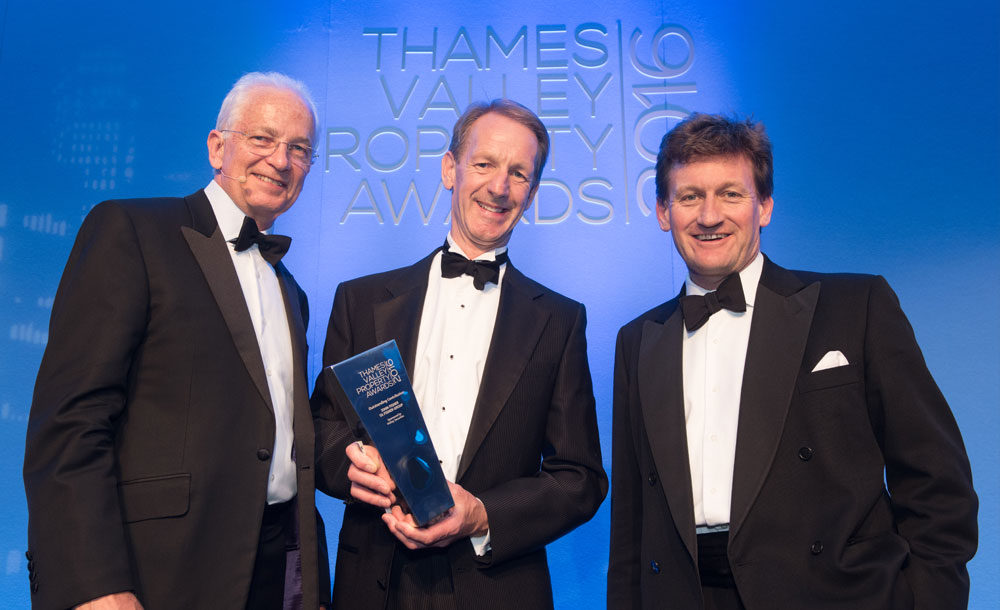 The award, the final one of the evening, was for a special contribution to the Thames Valley. T A Fisher managing director John Fisher was presented the trophy by category sponsor McKay Securities. The event host was former England cricket captain David Gower.

The T A Fisher story

Thomas Alfred Fisher was an entrepreneur who could spot business opportunities. Now 120 years and three more generations on, the firm he launched is excelling in finding them. T A Fisher, a signwriting business when it launched from Mr Fisher’s Cholmeley Road in Reading home in 1895, is now the area’s longest established housebuilder and developer, its longevity built around its agility and an eye for spotting trends.

Building and development became increasingly important as his sons Harry and Victor got involved. In the 1960s Mr Fisher’s grandson Keith brought central heating to small homes and helped carve the name into the Thames Valley’s housebuilding heritage.

In the mid-1980s, Keith Fisher’s son John joined and took the firm into new areas it continues to succeed in today, starting with commercial property development, a direction which proved successful very quickly.

John Fisher, who became Managing Director in 1990, said: “The housing market crashed in the late 1980s/early 1990s but the commercial development world continued for a period after and enabled us to continue developing.”

Since then that diversification has broadened further and the ability to be creative and niche in finding answers to often challenging or restricted sites has become a differentiator few major developers can match. Reacting to the economy is one of many ways T A Fisher demonstrates its ability to adapt.

Mr Fisher said: “We are a multi-faceted development company. Blue Prior at Fleet is a good example. It was a token business park and looked like another B1 office scheme but the market had significantly changed and we took it in a different direction.

“It has offices but it will soon have an assisted-living home, a thriving children’s day nursery and we have just commenced a residential phase. It’s a classic example of how to resolve a development conundrum.

“We are a bit more nimble, a bit more flexible. We continue to broaden the platform as we have a reasonable understanding of different use classes. For example we don’t necessarily develop nursing homes but we have sufficient knowledge of the market activity and viability to know whether it is going to work or not.”

One small development in Reading in the 1990s was the start of one division of the company which dominates the market in the Thames Valley. A small number of serviced apartments were developed in a former office above a trendy wine bar. The concept was rare then but demand was rising.

Mr Fisher said: “We decided to spin off a separate portfolio, targeting the growing number of IT companies settling in Reading. Oracle and Microsoft were typically bringing contract workers to Reading but with nowhere to stay short term but the Post House (in Whitley) or the French Horn (in Sonning).”

A separate division, House of Fisher now not only operates nearly 200 apartments, mainly in apart-hotels developed by the group, but provides the 24-hour services that support them.

Its 100 King’s Road development in Reading, its flagship apart-hotel complete with 24-hour gym, where House of Fisher turned a redundant office building into a dynamic home for the area’s transient contract workers, illustrates the firm’s knack of carving out innovative solutions.

House of Fisher sits alongside T A Fisher’s housebuilding, investment, mixed use, conversions and land acquisition divisions in a business which carved its own niche in the property world while keeping specifications and quality a high priority.

Mr Fisher added: “We are lowly geared (financially) and we know the area really well. We are prepared to take a risk and take on different propositions. It doesn’t have to just be pure housing or pure commercial.

“Our specialism is the Thames Valley. We are difficult to pigeonhole but that’s our strength.”