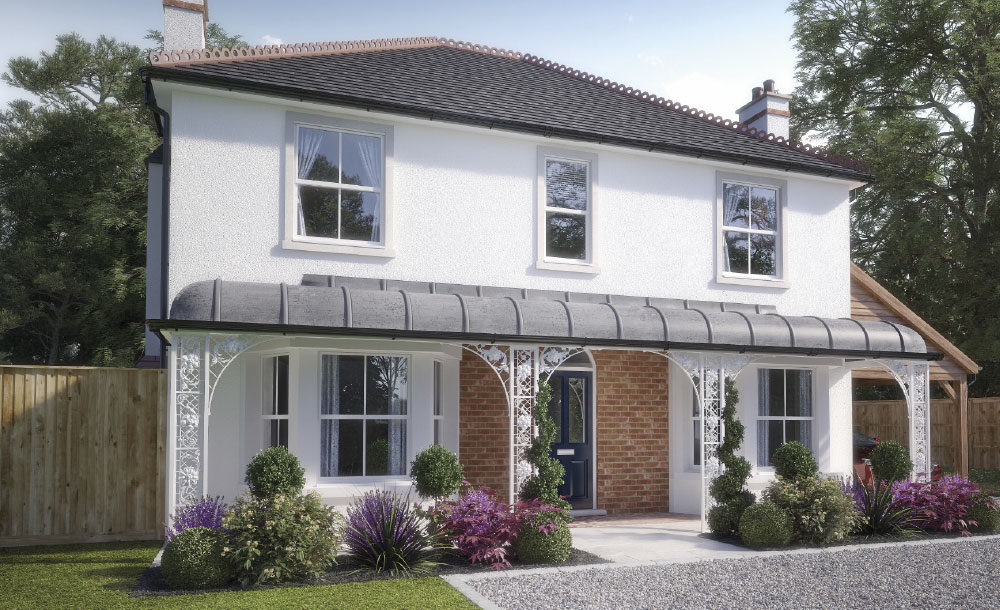 A house brimming with history in its South Oxfordshire community is to get a new lease of life as part of T A Fisher’s latest redevelopment.

The Square House, in Stoke Row Road, Peppard Common, a four up, four down property was built in 1900, long before most in the area. It is to be refurbished and two further four bedroom detached homes will be built within the grounds.

For most of the last century the original house had a connection with the health profession which, apart from a brief spell in 1947, lasted until its sale to T A Fisher in 2014. A succession of doctors lived in the house and treated their patients in a surgery in a separate outbuilding.

So for 27 years, residents of Peppard Common had not only a surgery within their community but doctors living on site. A night bell for medical emergencies still exists next to the front door.

The Department for Health bought it in 1947, and from 1950 let it to the eminent psychiatrist Dr Gerald O’Gorman, the then new Medical Superintendent at Borocourt Hospital, who lived at the Square House with his family.

Exuberant and energetic Dr O’Gorman, who, during the war, joined the Royal Army Medical Corps, working as a psychiatrist in a number of battle zones was a pioneer in the subject of what is now termed intellectual disability.

After he died in 1998, his wife Katie O’Gorman continued living at the house until two years ago when she decided to downsize, ending the family’s 64-year connection with it.

As well as its medical and community significance, the house is characterised by a number of quirky, historical features.

A railway carriage has survived in the garden since the 1920s. Its various uses have included a home for the manservant of the early owners of the house, storage space and a great place for the O’Gorman’s children to play in.

Yet, no-one living today can seem to explain how almost 100 years ago, it found its way to a house in rural Peppard Common, miles from any railway track.

Another feature of the garden is less obvious. Hidden beneath an outdoor slab is something known as a Chiltern Flask, an igloo-shaped underground chamber. Rainwater would be collected in it and, via a pump in the garden, could be re-used. Sustainability, Victorian-style.

T A Fisher is working hard to retain, as a conversation-piece for the house’s new occupants, a set of servant bells in the kitchen bearing the name ‘Callas, Sons & May’, a well known Reading business at the time. They would allow the past occupants of the upstairs rooms to ring for service.

One interesting aspect of the Square House can only be seen by venturing along the road where there is an almost identical home, facing the opposite direction, effectively ‘bookending’ a row of homes in Stoke Row Road!

When T A Fisher was approached, land consultant Jeremy Fisher knew of it straight away. He would frequently pass it when out running but had never previously known its significance.

He said under T A Fisher’s scheme, the Square House will be ‘stripped out and put back together again’. Much of the charm and history will remain while allowing mod cons usually associated with newly built homes.

Two further four bedroom detached homes will be built within the grounds in complimentary styles, both having large kitchen/dining/living areas which are popular with modern family living.

A new improved access for the three properties will be formed onto Stoke Row Road, intended to increase visibility and safety in and out of the development.

Work is expected to start in January 2017 with completion in the Autumn.