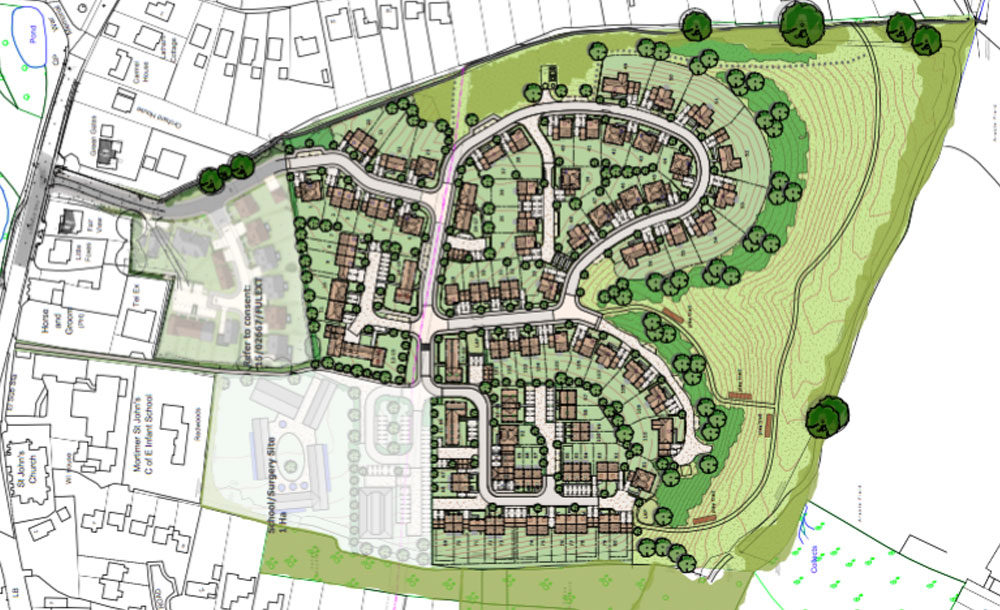 Plans have been submitted for 110 homes at Mortimer along with three hectares of open space with further land set aside for a school and GP surgery.

The detailed plans have been submitted to West Berkshire Council by Thames Valley housebuilder TA Fisher in conjunction with the Englefield Estate which owns the land.

The homes range from one-bedroom flats to five-bedroom houses. Forty-four of the total will be affordable, with some available for rent and others, for shared ownership.

As well as three hectares of public open space and landscaping, a hectare of land will be set aside for a primary school and GP surgery.

T A Fisher, which was based in the village for 28 years, drew up the plans after lengthy involvement with the Mortimer community. The proposals are designed to reflect the ambitions of the Stratfield Mortimer Neighbourhood Plan.

A local referendum in June backed the adoption of the neighbourhood plan with almost 90 per cent of voters in favour.

Edward Crookes, estates director of the Englefield Estate, said: “This proposal is very much in keeping with the wishes of the people of Mortimer, who spent a great deal of time and effort producing their neighbourhood plan to set out their vision for how they wanted their community to evolve to meet its need for new housing and facilities.

“The development includes an appropriate mix of affordable homes, and is close to the heart of the village and its existing facilities. This project is very much in keeping with the estate’s tradition of helping to provide local people with homes and facilities in the communities they love, as we have been doing for centuries.”

Julian Pacey, head of land and planning at T A Fisher, said, “We were based in Mortimer for almost 30 years, so we were determined to work as closely as possible with the community in developing these proposals which will provide much-needed new homes.

“Open space will be incorporated for everyone to enjoy, and the development will also secure a site for a new primary school and doctors’ surgery, which would be subject to future applications by the education authority and health service providers.

“We are grateful to the many local people who contributed to these detailed proposals which have been drawn up to align with the community’s own neighbourhood plan which identified this site as being the most appropriate to meet Mortimer’s needs.

“We have also taken into account views expressed at consultation events and public meetings in the village, and also worked closely with local authorities before submitting these plans to West Berkshire Council for approval.”

The plans were drawn up with planning consultants and architects Pro Vision of Newbury.