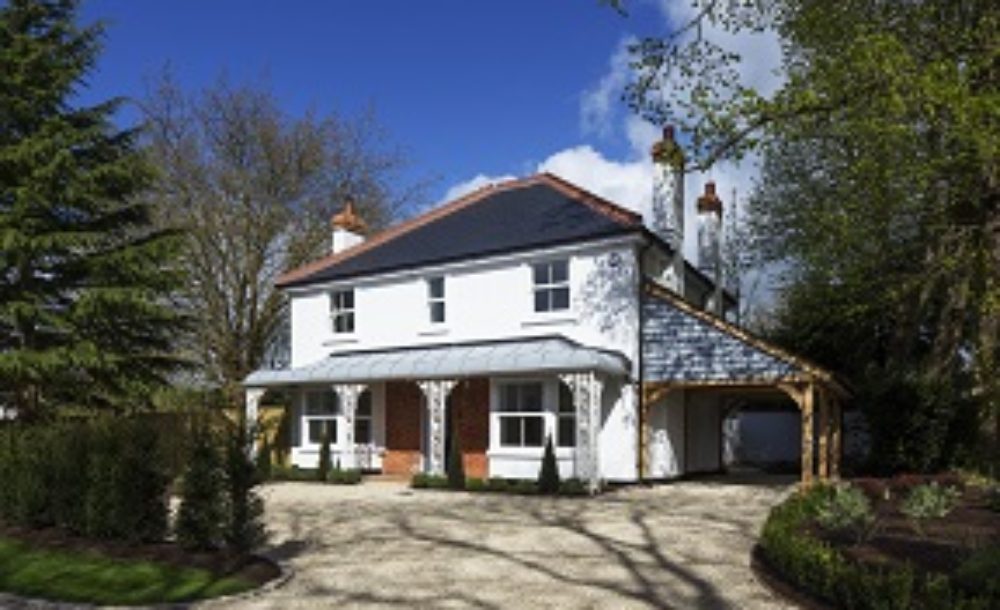 A T A Fisher development of just three homes, which proved to be one of its most challenging, has emerged as one of its finest.

Rather than demolish the historic Square House, a four up, four down detached property in Peppard Common, T A Fisher chose to refurbish, modernise and extend the property, while at the same time build two new family homes in the grounds.

The result has been a stand out scheme with projected prices achieved on all three homes in an uncertain pre-Brexit market.

Square House, built in 1900, just a few years after T A Fisher was formed, presented a number of challenges, one of them being a highway safety issue.

Its original entrance in Stoke Row Road was yards from a busy skewed junction. Cars taking the left fork off the B481 Gravel Hill would often enter the road at speed, making a right turn out of Square House a significant hazard.

Land consultant Jeremy Fisher said T A Fisher’s first priority was to improve safety and this was achieved by creating a new access in a more favourable position with a kerb build out acting as both traffic calming whilst enabling enhanced visibility for vehicles entering and leaving the new development onto the B481. This discretionary work was entirely funded by T A Fisher.

In renovating, restoring and modernising Square House, a balance had to be struck between what was possible to retain, what was essential work and the specification today’s buyer expects in a modern home.

Retained features include the original staircase, the veranda which was restored and reinstated, together with several original fireplaces. Only the more modern fireplaces were removed and a wood burning stove installed in the lounge.

The windows which were a variety of types and styles were replaced with UPVC sash windows.

Now Square House has all the benefits of a modern T A Fisher home including a high-spec kitchen/breakfast room and a main bedroom with en suite bathroom, yet it retains the charm and style of Victorian Oxfordshire.

The two new homes built in the grounds are exceptional too. Cassini House has three storeys and three of its five bedrooms have en suite bathrooms.

Torus House has four bedrooms including two en suites; its rear garden is enclosed by the original garden wall of the Square House.

Mr Fisher said: “I think the scheme is arguably one of the best T A Fisher developments. It looks stunning but there is so much more to it.

“Moving and redesigning the access was essential, then we sought to keep features in the Square House itself which involved considerable restoration.

“We would like to have kept more features but today’s buyer is very discerning so it was essential to weigh those requirements with retaining the essential charm the house offered and I think we have succeeded.

“The fact we have achieved our projected sales prices on all three homes appears to back up our faith in this scheme.”

The house has a long connection with the medical profession. In the early days it served as a doctor’s home and surgery and was later bought by the Department for Health. Eminent psychiatrist, Dr Gerald O’Gorman, the former Medical Superintendent at Borocourt Hospital lived there until he died in 1998.

His widow, Katy O’Gorman, remained in the house until she decided to downsize in 2016 and sold it to T A Fisher.

One remnant of its medical significance sill exists next to the front door. Although no longer in operation, the night bell for medical emergencies was retained in the refurbishment.